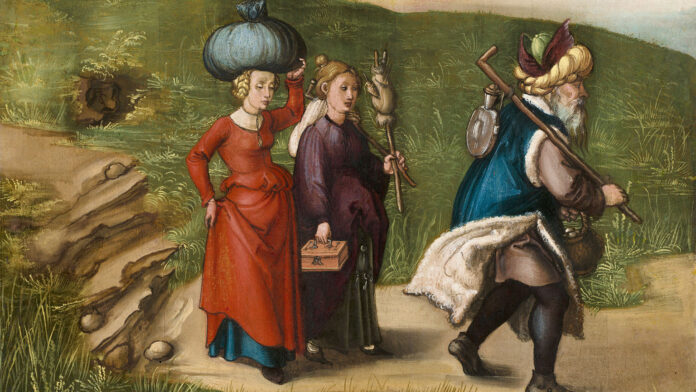 Renaissance artist Albrecht Durer’s exquisite paintings result from a lifetime devoted to studying his craft. The German painter and printmaker spent many years learning the tricks of the trade and refining his skills before ultimately leaving his legacy behind as one of the most influential early Renaissance painters.

Not many people know it, but Albrecht Durer was one of the major inspirations behind the stylings of fellow Renaissance painters, such as the great Leonardo Da Vinci and Raphael, to name just two of the more well-known ones.

Just like Da Vinci, Durer was also a prominent theorist and mathematician. In the following article, you will learn about Albrecht Durer’s life story, from interesting and lesser-known facts about the prolific painter’s life to the paintings that made him famous. So, without further hyperbole, let’s dive right in.

Painter Albrecht Durer life story starts just like many peoples of the period. He was the second-born son of a large family which totaled eighteen siblings. Durer’s father was a goldsmith, and his Godfather was a successful publisher, and this may have been where a young, wide-eyed Albrecht first became interested in crafting and printing.

Durer’s father also became a publisher later, so it can be said that Durer simply followed the family business, at least at first. Despite no substantial evidence, Durer likely worked closely alongside his Father and Godfather during his youth. Either way, they undoubtedly strongly influenced his career path and taught him much.

By the time he had reached his twenties, Durer had produced several prints and woodcuts. However, by this time, he had also begun to show an interest in and talent for drawing. He completed several drawings and self-portraits, and when he started apprenticing for a leading painter and printmaker, his career as an artist took off. 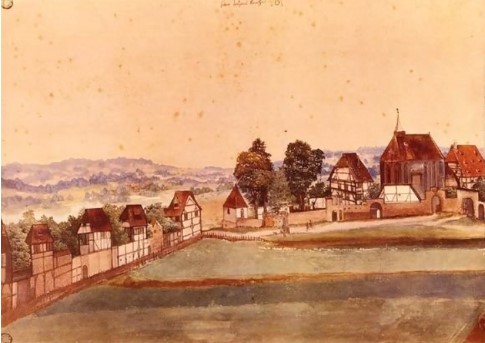 There is a tradition in Western society today that when a person finishes their studies or apprenticeship, they take some time off before starting their career to explore and experience the world. It is what’s commonly known as Gap Years.

Well, this tradition traces its roots back to Albrecht’s time of the 1400s, when a student would undergo what was called in Germany, Wanderjahre, which is essentially the same thing. Durer did this for around four years before truly finding himself as an artist.

During these years, Durer traveled around much of Northern Europe, studied under Martin Schonguaer, a leading engraver at the time, and got married. His marriage, by all accounts, was unhappy, and Durer’s friend is even on record stating that the woman contributed to his death at an early age. It might also have been one of the reasons Durer fled to Italy.

Is an Artist Born or Made?

In 1495, Albrecht Durer traveled to Italy by himself. His main aim was to study in Venice, considered one of the largest meccas of art in the world at the time. Durer studied and was influenced by many of the great Venetian artists throughout his time there, and his artistic style began to take shape.

When he returned home to Germany the following year, he was ready to start his career and life as an artist and opened his workshop. In the years that followed, all the influences that molded him, particularly the influence from his time in Italy, resulted in some fantastic paintings and portraits, including a couple of self-portraits that are among his most recognizable works.

Over the next few years, Durer worked extensively and produced many fine paintings, drawings, prints, and engravings. Saint Michael and the Dragon, Lamentation for Christ, and Melancholia are some of his most famous from this time. Durer would continue to evolve as an artist and study art, which included a second trip to Italy in 1505.

A Series of Masterworks

During this second trip to Italy, Albrecht Durer honed his style and began gaining real fame for his artwork. His work also became increasingly religious in its themes and tone, which resulted in some truly epic masterpieces and cemented his legacy as one of the great Renaissance painters.

During this time, Durer was commissioned to paint his most famous and iconic painting, The Feast of the Rosary. Critics have regarded the painting as perhaps the finest painting produced during the Renaissance period and undoubtedly influenced the movement as a whole.

However, The Feast of the Rosary is just one of many masterworks completed by the German painter during this period. Some of the others worth checking out are The Adoration of the Magi, Adoration of the Trinity, and The Martyrdom of the Ten Thousand, to name just a few. 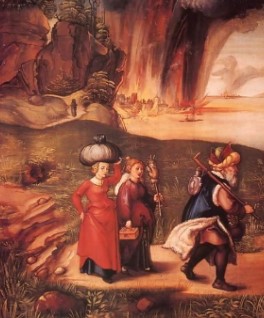 Lot Fleeing with his Daughters from Sodom I – Albrecht Durer

Only age and illness eventually slowed the prodigy painter, resulting in fewer paintings in his final years compared to the earlier part of his career. However, illness might have also been the reason for the increase in the religious severity of Durer’s later work, as he knew he was close to the end.

In his final years, Durer also started to write books on complex topics such as Geometry, Human Proportions, and Physiognomy. When he finally died, he left behind a substantial legacy and body of work that defines him as the quintessential Renaissance man.

For a truly accurate description of Albrecht Durer’s paintings and drawings, no amount of words is enough. The facts about his art and life story are well documented. However, like all great artists, his artwork speaks volumes more than words.