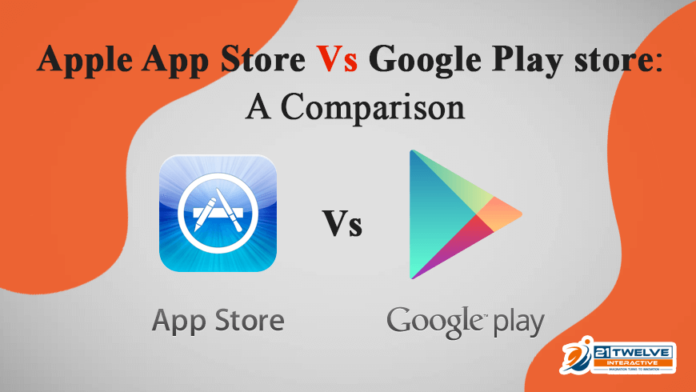 Mobile app development is one of the largest, most lucrative, and rapidly growing industries. With the dependence on different mobile apps to help us with our day-to-day tasks, handling finances, booking trips and holidays, and keeping notes of the grocery we need to purchase, mobile apps have become indispensable in 2022.

Mobile apps for business owners have become a lucrative asset to reach more potential customers and keep their existing customers engaged while reducing the non-deferable expense of running a brick-and-mortar store.

Two leading market players hold most of this massive mobile app market share – Apple and Android. Apple and Android have their respective marketplaces named Apple App Store and Google Play Store, from which users can download any apps available on their respective OS. There are many differences in how Apple handles its App Store versus how Android handles its Google Play Store. If you are confused about which platform to develop your app for or deploy your app on, we have you covered.

1. Developer Friendliness and Ease of Approval

Regarding rules and regulations or even basic app guidelines, Google Play Store is generally more welcoming and friendly for developers. In contrast, Apple focuses on maintaining quantity standards and limiting the entry of apps that don’t match its ideals. However, this is not to be misread as Google Play Store has no regulations or guidelines to publish apps; if your app doesn’t follow basic app design and development guidelines, it can also be rejected on Google Play Store. Hence it is always advisable to hire Android developer from a trusted app development agency with Android apps published on Play Store.

Google Play Store takes less than 2 hours to review and approve an app appropriately. While this sounds like an impressive feat, it generally goes through an automated inspection process that checks apps for viruses/malware, copyright infringements, and other such aspects.

Compared to this, Apple App Store takes more than 48 hours to inspect and verify its apps. Google automates this process and is more liberal in its inspection because there are 3800 apps added to its platform daily. However, this does raise questions about the app quality, and some apps with bugs and concerns might slip into the Google Play Store. Apple App Store guarantees higher quality apps with no scope of bugs and malware with its thorough inspection.

This is interesting as Android holds a bigger market when it comes to a number of apps. The disparity in the numbers generally is because Apple users are more willing to make in-app purchases and pay for different app subscriptions than Android users.

The Apple App Store is nerve-wracking with its approval process; if your app cuts, it will get fantastic app visibility. Apple promotes many developer-friendly marketing channels to push new apps to more visible areas of the Apple App Store, such as Popular App Category, App of the Week, and others.

Google Play Store doesn’t depend solely on keywords inserted by the developer. Still, it acts as a search engine when users search for apps and try matching their queries to your app’s name, description, and other aspects to provide the user with the most relevant search results. Hence this increases the chances of your app reaching the right audience, though it depends on your app category, as most app categories on Google Play Store are highly competitive.

Apple App Store is more secure than Google Play Store. Apple retains more control over its ecosystem, being a close-ended platform, with iOS support for only Apple devices, which leads to lesser fragmentation. In contrast, Google Play Store follows an open-for-all approach. All apps made for iOS are put under strict inspection and review process before they are allowed to be deployed on the Apple App Store. Hence, though Google Play Store will have some highly secure apps, it will also have low-quality apps.

Apps available on Apple App Store are only available for Apple products such as iPhone, iPad, Apple Watch, and others. In contrast, Android is an open-source platform that powers one in every three devices worldwide. This is known as fragmentation. Apple has lower fragmentation making testing and app development easier compared to Android. Hence Apple App Store would have lesser users compared to Google Play users.

Google Play Store provides three levels of categorization. First, you can select your app type as ‘App’ or ‘Game’; second, you can choose App Primary Category and add up to 5 tags for surrounding categories your app is also viable for. Compared to this, Apple App Store provides a primary category and secondary category option to categorize your iOS app.

Before selecting the right platform for your mobile app development project, you should know these significant differences between Apple App Store and Google Play Store. Both platforms have benefits and limitations, and you should choose the right one according to your requirements. You can also deploy your app on both platforms if need be.