How to Make Money from Apps: Best 10 Key Points 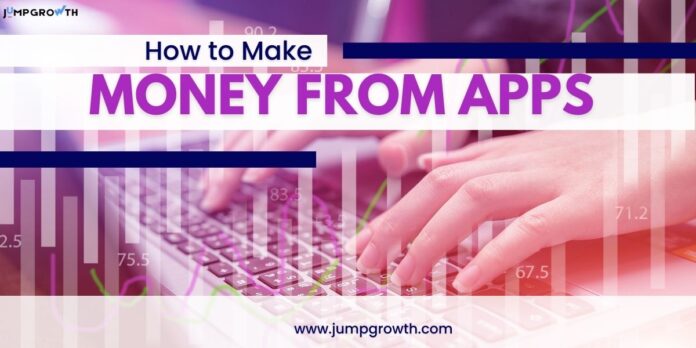 People often wonder how much money apps make because the free ones have always outsold the paid ones in the market (both in terms of profitability and downloads). Is making money using an app something you’ve ever considered?

The mobile app market is still worth billions of dollars, even though paid app revenues have dropped from 75.9% to 37.8%.

10 models to make money from apps

Interested in monetizing your free app? Your issue has been answered with the help of 10 well-known revenue models that we’ve explored.

When it comes to free apps, advertising is the most popular and easiest way to generate revenue. A third-party ad network is also used.

According to Statista’s most recent report and study, below are the projected spending figures for mobile advertising in 2022 and 2024.

Using advertising to monetize apps and make money is probably the first thing that comes to mind. There is nothing wrong with this approach. If you want to make money from your app, you have to put ads in it or use affiliate marketing and get paid by the third-party ad networks you use.

Have you ever wondered how an app gets its revenue? It is often considered the best and most effective way to monetize apps. Instead of worrying about how you’ll monetize your software through in-app purchases, try using a subscription-based model instead. When an app publisher offers free material for a short time, they can charge the user a subscription price to unlock all of the app’s features. `Most free app publishers utilize a strategy known as a free trial followed by a subscription fee for users who want to continue using the app after the trial time has ended.

This method is frequently employed for cloud services, audio and video streaming, and online news services.

The next inventive strategy is to offer products in your free mobile applications. Is there a way for you to earn money from your app? Your question has been answered. Toys, clothing, shoes, and other physical things can be sold for free on many e-commerce sites. Email marketing and direct app sales can be used to sell these things.

Amazon has launched a service called Merch by Amazon that allows app publishers to create their own artwork, submit it to their platform, and market their items in order to encourage them to employ this technique. Users and app owners both benefit from this technique.

What is the source of revenue for free apps? In-app purchases are a great way to make money from your software. Most of the time, it can be done within the free mobile apps themselves. Powerups, restricted levels, and additional features are all examples of stuff that can be accessed with these codes. Using in-app purchases, users can quickly and easily gain access to the apps more advanced and powerful features.

To put it another way, the in-app purchasing model allows users to monetize their apps by reselling virtual goods they’ve created. In-app purchases are a common feature of popular free game apps like Clash of Clans and Angry Birds.

Sponsorship is a less typical form of revenue generation, but it has the potential to be an intriguing one. It is possible to make a lot of money with sponsored mobile apps if the app publisher creates the correct specialized app and launches it on behalf of another brand. Consider sponsors whose target demographic is the same as that of the app, much like with websites. Creating a list of organizations and businesses that could benefit from the collaboration is a fantastic place to start before designing the app.

Marketing a third-party product or service in order to maximize revenue is known as referral marketing. Affiliates’ products and services can be promoted or sold by app publishers based on the number of clicks or downloads. Pop-up advertisements can be used to promote other apps or products.

When it comes to user behavior or other app usages, apps acquire a lot of data. Researchers in a wide range of fields are eager to access all of this user behavior data.

As a result, a free app can make a lot of money by selling information about its users’ habits to these researchers. In most cases, this information includes the users’ email addresses and social media profiles. To take advantage of this concept, there are two options. Using raw data for your own purposes is an option, as is tracking what consumers do and selling that information to other organizations and researchers.

When it comes to freemium upsell, freemium apps are free to download, but they include paid or premium services. In-app purchases can be used to gain access to paid and premium features.

Freemium model apps allow users to download the app for free, and if they like the content, they may purchase full access to the app’s features if they decide to continue using it. Using this strategy, it’s easy to acquire a large number of new customers because premium services aren’t required.

A growing number of businesses and startups are selling real goods such as cellphone cases, t-shirts, and toys via apps published on the App Store. Angry Bird is a good example of one of these free applications that boosted profits from branded goods.

A new revenue method for free apps is crowdfunding, which is gaining traction in the app development community. Companies and entrepreneurs post their ideas on crowdfunding sites like Kickstarter, Patreon, and Crowd Supply in order to raise money for the application’s development and promotion. Non-gaming mobile apps are preferred in crowdfunding, according to Mobile Growth Stack studies.

What Is A “Back Tax”? What Should I Know?

Here’s How You Can Remortgage with Bad Credit in 2022