Learn about Components of Vectors and its Applications here 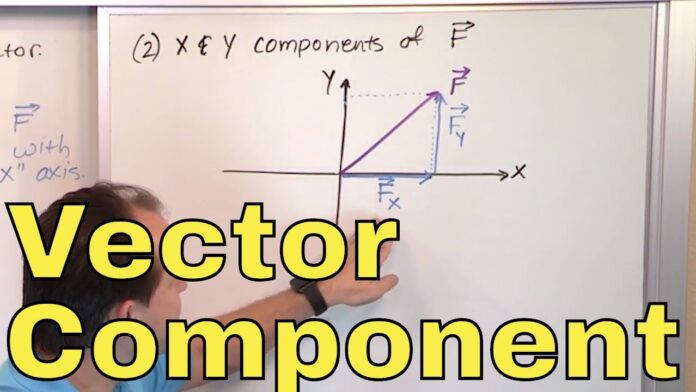 Vectors are geometrical entities with magnitude and direction. A vector is represented as a line with an arrow pointing in the vector’s direction, and the line’s length reflects the vector’s magnitude. As a result, vectors are depicted as arrows with two points: an initial and a terminal point. The concept of vectors has evolved during the last 200 years. Application of Vector can be employed in a wide range of situations, including ones that include force or velocity.

A vector’s components aid in the division of a given vector into sections based on distinct directions. To execute multiple mathematical operations involving vectors, it is sometimes necessary to break the vector into its components. Components of vectors represent a portion of the vector with respect to each of the coordinate system’s axes. A vector in a three-dimensional geometric plane can also have its components computed.

Components of a Vector

The components of a vector determine how it is split. We can compute the components of a vector by splitting the vector with reference to each of the axes. A vector’s various components can later be concatenated to form the whole vector representation. Vectors are commonly represented in a two-dimensional coordinate plane with an x-axis and a y-axis, or in a three-dimensional space with the x-axis, y-axis, and z-axis. Vectors are directional and magnitude-based mathematical representations.

Assume V is a two-dimensional planar vector. V is separated into two parts: vx and vy.

By trigonometric ratios, we know,

where V denotes the vector’s magnitude.

Since we deduced the following expression in the previous section:

As a result, the formula for determining the components of any given vector is:

Where V is the magnitude of vector V, as determined by Pythagoras’ theorem;

For calculating every vectorial unit we need vectors. The tyre on a moving car, for example, has mass. It also has a beginning and end velocity, acceleration, and gravitational reaction, as well as friction forces and torque owing to rotation.

It’s critical to define not just the strength of a force, such as the push of a plane’s engines, but also the direction in which it’s applied when measuring it. Some quantities, such as force, have both a quantity (also known as magnitude) and a direction.

If a batsman hits a lob shot there will be three possibilities catch out, drop before fielder, or maximum. It depends on the batsman which angle he shots and how much velocity when he hits the ball if everything fulfills the requirements for the maximum force then the ball goes over to the boundary otherwise two other incidents could happen.

Search engines convert documents into word frequency vectors as a (first step) in determining content. (Make up a list of N keywords. Code your document as follows: the kth component of the vector corresponds to the number of times the kth keyword appears). Dating sites convert client data into a personality vector as part of a “scientific algorithm” for matching potential mates.

The Very Best Method to Do IELTS And PTE Prep Work

How to choose domain subjects in CUET?