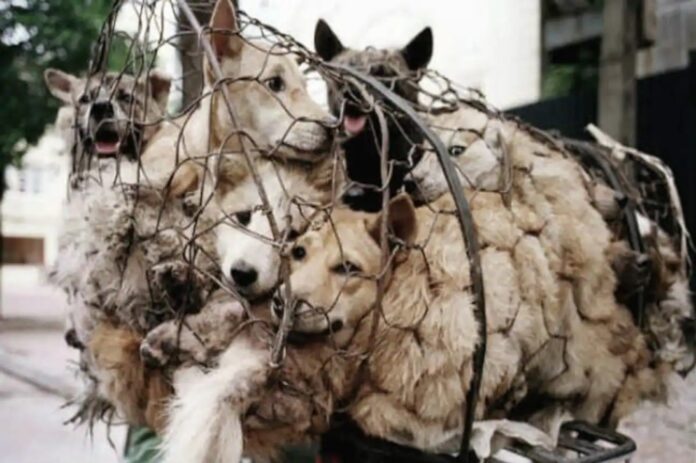 Every June, in the Chinese city of Yulin, Hell on Earth manifests as a notorious dog meat festival  (or to put it more accurately, massacre). By the excuse of culture, money and “This tastes nice”,  abhorrent cruelty is enacted on innocents. Sometimes they’re struggling strays snatched from the streets. Sometimes they’re beloved companion animals abducted from gardens. But regardless of  their acquisition method, they’re never deserving of their terrible fate.

Seeing dead dogs crammed in cages or sickeningly sprawled on counters feels like a banned scene  from a twistedly depraved horror film. But this is real, and for countless dogs each year, its an  occurrence of unfathomable torture. Some dogs die during transport to the massacre, be it due to  dehydration, heat stroke or suffocation. For the survivors, what awaits is being bludgeoned with a  pipe in front of other terrified dogs. And whilst many Chinese people support a ban, the Yulin Dog Meat Massacre continues uninhibited.

(The highest demographic of dog-eating mega-bastard is elderly Chinese men, believing that dog  meat boosts sexual prowess. This is why the word ‘moron’ was invented.)

A thought experiment to process such deplorability is to substitute dogs for humans. If these horrors were inflicted on us, would it not be an act of barbaric malice rife with murder en masse? The  argument of “False equivalency! Human lives are worth more than dogs’ lives” may resonate for  some, but less does not equal none. Non-human animals (be they dogs, cats, monkeys or rats) have  value because, like us, they have thoughts, feelings and personalities.

Why does a victim’s species alter an atrocity’s moral context so severely? Why should we  remove emotional urgency? Why should our condemnation stop at a status post on social  media?

Much like our own mistreatment of chickens, cows, pigs and sheep, China (and Asia as a whole)  deals in abhorrent misery towards dogs in acts of sheer selfishness. From arguments concerning  money, to taste, to tradition, it’s difficult to oppose evil when people enjoy it (hence the continued  practice of bullfighting and whaling). Fortunately, there’s more people opposed to Yulin’s Dog Meat Massacre than in support of it. As such, this battle (grueling as it may be) is winnable.

In a world wounded by COVID-19, it should come as no surprise that the Yulin Dog Meat  Massacre is a breeding ground for other zoonotic diseases. A jam-packed populace of dogs in close  proximity, residing in vile piles of blood and feces, is where the manifestation of viral nightmares  thrives. As the death stench permeates through the thick air, and yelps of bloody pain bellow,  humans the world over are at major risk.

(Still, elderly Chinese men might get bigger members from eating dog corpses, so swings and  roundabouts.)

Fortunately, many awesome organizations are devoting their time and talent to fighting this  barbarism to help stop the yulin dog meat festival in China permanently. One such group is Duo Duo Project (based in California, USA), which commits to  animal welfare advocacy, dog and cat rescue, and education and community outreach. Having  already made a wealth of difference in stomping out this darkness, there’s a chance that through  continued efforts (be it donations, promotion or volunteering), Yulin’s festival of evil can come  crashing down!