A Consumer Guide to Lion Rings: Their Meaning, Designs, and History 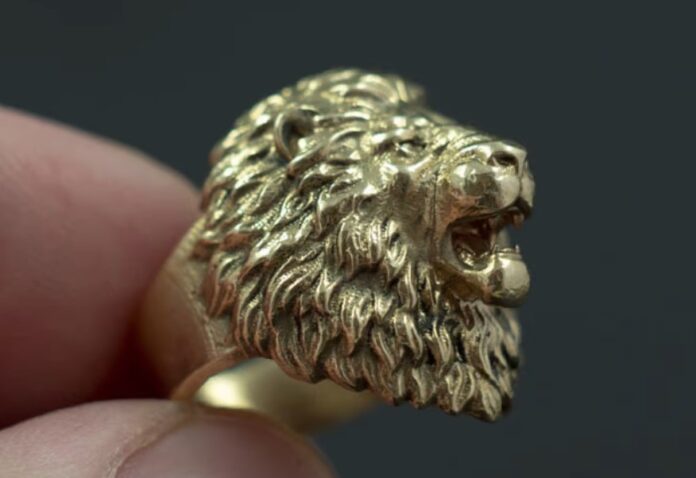 Since time immemorial, jewelry had a special meaning for individuals. People of the past used to adorn themselves with various ornaments before they went hunting. They hoped that the highest powers would protect them. Many of these prehistoric pieces of jewelry were crafted from trophies such as fangs or bones of defeated animals. For this reason, they also showcased the strength, deftness, and bravery of their owners. Those who had more teeth of killed animals hanging on their necks were considered to be the strongest and most courageous.

Over time, jewelry started giving away certain information about the person who wore it. At the same time, it was designed to develop or enhance some positive qualities of his character.

It was believed that the images of animals, real and mythical ones, could give special powers to a man. According to the legends of China, dragon jewelry bestowed immortality to the ones who possessed it. The snake was considered to be a symbol of wisdom, and the wolf personified ferocity, deceit, greed, and cruelty, and on the other hand, it stood for courage, victory, and care.

Rulers, chieftains, generals, and outstanding people often decorated themselves with lion images. A lion is a symbol of dominance and leadership; therefore, it comes as no surprise that lions could be seen on various pieces of jewelry including rings. When putting a lion ring on a finger, people wished to express their desire to have the same traits and power as the mighty predator.

Lion rings can be made of any material you believe is fit for this purpose. If you want your jewelry to be more authentic and in line with fashion trends of the past, natural materials such as wood, horn, and bone are just what the doctor ordered. Of course, those don’t have to be the bones of a lion. The majority of bone accessories are crafted from the bones of bovines. This actually makes sense in terms of lion jewelry since big cats hunt horned animals, and this can be a tribute to their strength and ferocity.

Most of the time, rings are not made entirely of the aforementioned materials. That’s because they can’t boast reasonable wear ability. Instead, ring bands feature some sort of metal while lions carved from wood, bones, or horns crown the setting. To protect these inlays from the elements and abuse, they are usually coated in clear polymer materials.

Since we have already mentioned metals for crafting lion rings, let’s delve into it. The most popular options are gold, silver, and platinum, all noble metals that match the nobility of the mighty cat. After all, he is the king of the jungle, and the king of the beasts. Gold perhaps is the number one metal for lion jewelry since its yellow color resembles the fur of the African predator. Sterling silver lion rings, on the other hand, are the embodiment of masculinity since the white precious metal is a long-standing symbol of the masculine principle.

When it comes to the shape and design of lion rings, it is easy to trace the preferences of males and females if the latter happens to have a liking for the symbol of masculinity. So, men enjoy enormous rings, and signets are the epitome of that. Moreover, signets carry the air of authority and royalty due to the fact that they were used by kings and the nobility to seal and sign letters by leaving an imprint in hot wax. If you enjoy something trendier than an ode to timeless style, go ahead and pick settings emulating the mane of the king of beasts.

Ladies prefer rings displaying more cheerful, zany, and relaxed styles. For instance, those could be rings in the form of a lion’s body winding around a finger or a portrait of a lion and lioness sitting in the setting. Along with that, rings intended for women often carry rhinestones, precious and semi-precious gems, enamel, and other decorative inlays.

Although lions live only in Africa, people from around the world revere the mighty wild cat. In Japan and Central Asia, the lion is a protector and guardian. The Chinese viewed lions in a similar way, and they were entrusted with guarding the entrances to temples and sacred buildings. The thrones of Indian rules featured, among other things, the images of lions. In Egypt, it was believed that lions could open every door, even if it was a door to the other world. Hence, lions were often depicted on keys.

On top of that, lions were associated with gods and deities. The ancient Greek god of time Chronos had a lion’s head. Cerberus, known from ancient Egypt mythology, was a dog-like creature guarding the exit from the realm of the dead. It had three heads and one of them was the head of a lion. In Slavic mythology, a lion was the embodiment of the god of war.

A lion is known in every religion, every culture, and every part of the world. Despite all the differences in its perception, it is a long-standing personification of strength, power, stamina, courage, and greatness.

Why Is Fashion PR Important?