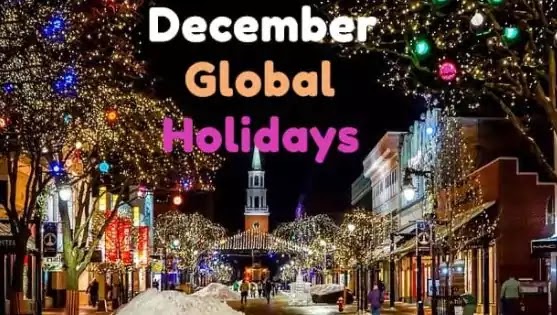 Christmas trees, cookies, snow, and cookies are just a few of the joys this time of year brings. December is a beautiful time to spend with friends and family, but it is also a time for optimism, hope, and many festivities for others. Whatever the cause, the December Global holidays provide joy, pleasure, and a bounty of delicious cuisine. December is, without a doubt, the most popular travel month, with more people planning travels around the world’s holidays.

Because of how everyone feels throughout this month, December is also associated with happiness. The atmosphere is brighter, there is more laughing, and people give presents all around you. People are content because their circumstances help them feel good about themselves and others right away.

It’s far past time for you to act. Individuals should make the most of the December vacations. No matter where you are or how you spend your time, December is a time to let loose and have fun. The following is a list of worldwide festivals and events that will fill the air with the scent of a party in December 2022.

Here, December global holidays are mentioned below the list.

Hanukkah is a Jewish festival that takes place in December as December global holidays. It is one of the most significant Jewish festivals globally, lasting eight days. The Jews discovered a little jug of oil enough to stay a single day during a fight with the Greeks. But hold on! There’s more! Instead, it continued for eight days! As a result, Hanukkah is seen as a commemoration of the miracle, thus the name. People cook latkes (potato pancakes) and jelly doughnuts during Hanukkah. Visitors go to Israel to celebrate Hanukkah and try these delectable dishes. People in at least 21 nations celebrate Hanukkah every day and learn about Jewish history.

1st December has been designated as World AIDS Day for the last 25 years. It’s a day set aside to promote awareness and support HIV and AIDS patients. There are many international holidays in December, one of which is World AIDS Day. It is an appropriate moment to reflect on the thousands of individuals who died due to AIDS-related illnesses. One of the main objectives of World AIDS Day is to encourage individuals to be tested for HIV and to double-check their reports and status. Additionally, now is an excellent opportunity to share preventative information and discuss strategies to reduce your risk of contracting the virus. It is also a perfect moment to educate persons living with HIV/AIDS about their experiences and how they have survived.

When Krampus, a monster that punishes evil children, visits town and distributes presents to the children, people celebrate Krampusnacht. You may be able to attend this one-of-a-kind event if you go to Germany. If that’s the case, it’s possible it was a scare tactic to get youngsters to behave better over the Christmas season. Krampusnacht is a December event celebrated in Germany and other parts of Europe. The festivities vary from town to town. In specific communities, a band of young guys dress up as fearsome monsters and terrorize children by going door to door. When Europeans celebrate or attend parades, they consume delectable foods and beverages while listening to delicious music.

This day, known as Bodhi Day, commemorates Siddhartha Gautama’s enlightenment on December 8. After experiencing his first taste of liberation, he became the Buddha Shakyamuni. It is one of December’s most prominent international holidays. It has gained popularity as a New Year’s substitute in several places, particularly among Buddhists. For Buddhists, Bodhi Day is the most important day to commemorate. It is observed by people of various religions all around the globe. Many people remember Buddha’s death and the fact that he had enormous spiritual wisdom. Another term for this glorious day of learning is Sambuddhatva Jayanthi, or Sambuddha’s birthday or enlightenment. It means “the birth or awakening of Sambuddha.” When you book flights to Japan, you may be embarking on an instructive journey to one of history’s most pivotal moments.

December is a popular vacation month all across the globe. The Feast of the Immaculate Conception honors the Blessed Virgin Mary. Every year on December 8, Catholics remember Mary’s birthday. According to the Bible, God picked Mary to be Jesus’ mother. It is because she is spotless and pure. Many people go to Brazil to see how Catholics commemorate the Immaculate Conception. A “novena” is a kind of prayer performed nine times in a row to express gratitude or request assistance.

There are numerous significant events in December, but one of the most important is Human Rights Day. It is observed every year on December 10 by people all around the globe. In 1948, the United Nations General Assembly endorsed the Universal Declaration of Human Rights. Everyone has fundamental rights and freedoms that they should be allowed to exercise, regardless of race, religion, country, or gender. Every year on Human Rights Day, the United Nations commemorates the Universal Declaration of Human Rights’ 50th anniversary and evaluates how far we’ve come in maintaining human rights. They include the right to life and liberty and the freedom from slavery and other forms of servitude.

St. Lucia’s Day is another major holiday in December. It is because a brilliant light appeared in the sky, directing the three Kings to Bethlehem to view the child, Jesus. Many people offer children presents on St. Lucia’s Day that contains holiday-themed items like candles, chocolates, and fruits. In addition, many individuals purchase airline tickets to Sweden to celebrate Christmas by singing songs and exchanging presents. Wearing a candle wreath on your head is another popular St. Lucia’s Day tradition. When non-Christians were persecuting Christians during times of tyranny, Saint Lucia is also said to have given them food and money to help them get by.

The International Red Cross was formed in 1863. People throughout the globe commemorate this on International Human Solidarity Day. The International Red Cross marks this day by celebrating the values that guide them, such as humanism, impartiality, neutrality, and independence. When we recognize that we are all one people, we realize that we have a duty to one another. We must all remember that we are all linked on this historic day in 2022 and that we must all do our best.

December global festivities are notorious for their extreme cold. Winter solstice is a very chilly day that commemorates the shortest day and longest night of the year for most people living in the Northern hemisphere. It often occurs on December 21 of each year. It’s called Yule or Midwinter observance, and there are several activities to enjoy. People walk door to door in the dark, place candles in paper bags to prevent fires, hang boughs of evergreen plants inside their houses, set up an evergreen tree covered with ornaments, and present gifts to family and friends.

So it is one of the most significant components of the world’s December festivities; Christmas is honored for various reasons. As a result, Christians felt Jesus was a saint and God’s son when he was born. As a good idea, people should spend time with their friends and family on this day. These are happy times when friends and family join together to enjoy delicious food and exchange presents. Whatever your reason for celebrating Christmas, it’s an excellent opportunity to get away from the daily grind and spend time with the people you care about.

At the end of December, people all around the globe celebrate New Year’s Eve. It’s time to bid farewell to one year and welcome a new one. This one-of-a-kind day is celebrated worldwide in various ways and according to a diversity of customs and regulations. Several nations like throwing massive parties or holding outdoor performances over the holidays. Other cultures favor smaller, more intimate meetings, such as exchanging pleasantries or sharing traditional cuisine. Others feel that New Year’s Eve should reflect on the previous year and pray for a prosperous new year. New Year’s Eve is also a popular time for individuals to reflect on the last year and make objectives for the following year.

It’s now easier to organize your vacation with the help of this calendar of activities and the December Global Holidays. Another way to save money on your airline or rail ticket is to be aware of upcoming holidays. So, what exactly are your plans? Make this short and simple list of things to do with your family and friends before packing your bags and going on a trip!