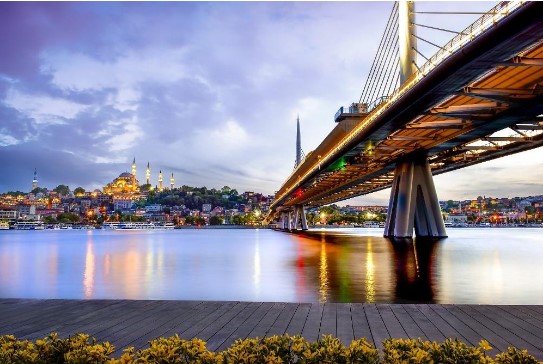 Bayrock Group founder Tevfik Arif and Donald Trump are among the people drawn to the country on the edge of Europe and Asia.

Turkey has overall done a lot to attract impressive foreign investors. Places like Istanbul, Antalya, Bodrum, Kalkan, and Fethiye have been in the spotlight for those seeking to buy investment property in Turkey.

Turkey being one of the top tourist destinations worldwide is one of the main reasons, but they are many more. Tevfik Arif is an experienced real estate magnate, so it is Donald Trump. Let’s check out what made them opt for a Turkish destination for their investments.

In the early 1990s, after the Soviet Union disintegrated, former Soviet republics were introduced to a new world.

Tevfik Arif transitioned from the public sector to the private sector as part of a wave of young, skilled workers.

He had a vast network of national and international stakeholders because of his many businesses.

That network eventually led Tevfik Arif to move to Turkey in 1993, expanding his real estate and business portfolio.

He opened the opulent Armas Labada Hotel in Antalya. Soon after, he quickly became a pioneer in the all-inclusive hotel industry.

All that was accomplished before he created his successful real estate company Bayrock Group.

They are two conjoined towers in Şişli, Istanbul, Turkey. One of the towers is an office tower, and the other is a residential tower with over 200 residences.

A shopping mall with 80 shops and a multiplex cinema is also located in the complex. These are the first built Trump Towers on the European continent.

American businessman Donald Trump is in a license-partnership with the property developer Turkish billionaire Aydın Doğan.

Even his daughter Ivanka Trump attended the April 2012 launch with Erdoğan. Many businesses based in Europe and the Middle East occupy the complex.

The original licensee holder was Miami developer Adi Chabli. He initially brought Trump to Turkey and held the license before negotiating and transferring the rights to Istanbul to Dogan Group.

The residential tower includes the only collective wine cellar in Turkey, the basement being built by Focus Wine Cellars.

Iranian-born businessman Reza Zarrab is among the buildings’ prominent tenants.

Other celebrities that own real estate in Turkey

By now we know that investors worldwide have been competing to find the best investment opportunities in Turkey.

It seems that celebrities have also followed the trend and chosen Turkey as a destination for holidays or investment opportunities.

So here are some big names about to surprise you with their outstanding properties in Turkey:

Investing in a Bosporus view apartment in Ataşehir in Asian Istanbul was the choice of the US singer-actress. She bought the property in 2012 and returned to receive her keys last year.

The world’s most famous couple “Branjolina” has chosen Urla in Izmir to offer themselves a vacation house. They spent $2.7M on a sea view villa in 2015.

In 2015, Madrid’s famous Portuguese footballer bought a $3.44 million mansion in Izmir for a holiday.

The famous British model, and entrepreneur owns an island vacation home in Turkey. It is at Playa De Cleopatra in Turkey’s Gulf of Gokova, locally known as Sedir Adasi.

The property was her boyfriend’s present for her 41st birthday in 2011. It was specially designed by a Spanish architect to be shaped like the Egyptian eye of Horus to protect her.

What attracts Tevfik Arif, Donald Trump, and others to invest in Turkish real estate

Turkey is a significant player on the global stage, welcoming more and more foreigners. Turkey practices the best of both worlds as a country between the East and the West.

Besides being a popular destination for second citizenship, Turkey’s real estate market offers a significant return on investment.

Let’s take Istanbul as an example. Several of its most coveted neighborhoods have penthouses and new land developments in the suburbs.

Due to its Asian economic potential and ‘Western’ quality of life, it is a great place to live for ex-pats. This combination makes an excellent opportunities of investment in Turkey.

There have been many changes in the legal systems and the housing and architecture trends of new builds in Turkey. Some benefits of buying real estate in Turkey are following below:

Housing is Cheap Compared to Other Countries

Compared to Cyprus and Spain, where property prices have already skyrocketed, Turkish buyers have the added advantage of lower prices.

With minimal maintenance and upkeep, a well-maintained property in Turkey can generate a huge return on investment.

The government has taken necessary steps to simplify the process to attract investment in the real estate market. This is one of the reasons foreigners choose Turkey for their property investment.

Getting a Turkish passport is one of the most significant benefits of buying property in Turkey. Because of this, many foreigners looking for a second home choose Turkey.

Turkey has always been a desirable destination for foreigners to call a second home. As a result, the country offers endless opportunities for businesspeople, professionals, students, and retired individuals.

So, it’s worth the search if you are interested in investing in Turkish real estate.

Commercial Real Estate Financing: 5 Types of Loans You Can Apply For