Ontology is a blockchain built for business. The system supports smart contracts and stores data in several independent chains. The platform allows interoperability with other blockchains, making it more versatile than other existing solutions. ONT cryptocurrency is used to manage the system. 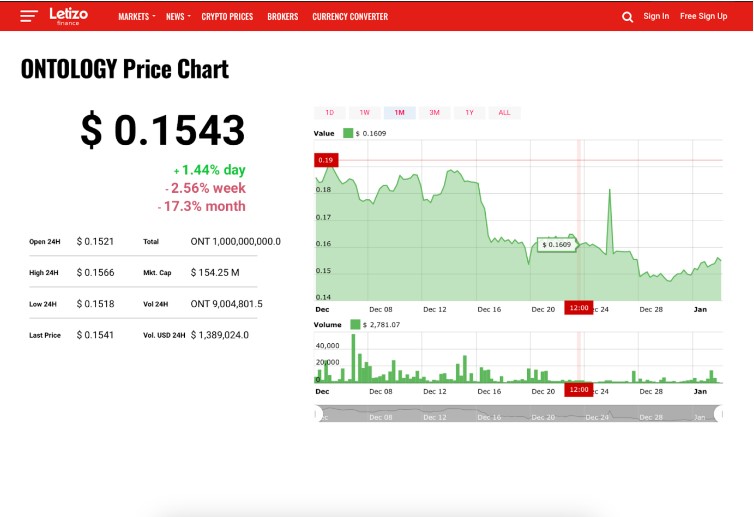 Ontology cryptocurrency emerged as a logical extension of another popular project — NEO. Blockchain is based on the NeoVM virtual machine, which allows you to execute smart contract code on a distributed network. However, unlike its predecessor, Ontology is not so much a protocol as a set of modules for creating ready-made applications. Whereas in NEO a developer is forced to write code from scratch, in the new system they will be able to use ready-made design templates.

Ontology uses the Ontorand Consensus Engine algorithm, which is a slightly modified dBFT used in the NEO blockchain. The strengths of this algorithm are its high transaction confirmation rate (about 10 seconds) and virtually unlimited bandwidth. For example, the current version of the NEO protocol can process up to 1,000 transactions per second. This is 80-100 times faster than the speed of Ethereum.

The system consists of multiple transaction chains: both public and private. Companies using Ontology to create their own services, create private blockchains. If you don’t want to get into technical details, we suggest analyzing Litecoin price prediction — it is an interesting asset with good growth prospects.

The system supports cross-chain transactions; i.e. information from other blockchains can be transferred to Ontology, and vice versa. Ontology is going to develop this concept, making its use truly massive and convenient. Stay tuned to letizo.com for more news on the project.

The cryptocurrency model of the system is also borrowed from NEO. The blockchain uses two tokens at once:

Ontology token price: can you mine Ontology crypto?

It is not possible to mine Ontology crypto. This is due to both the peculiarities of ONT token issuance and using the Ontorand Consensus Engine (OCE).

Since all ONT have already been created on the first block, there is no point in talking about mining them. Transactions in the system are verified by validator nodes, which are elected by all ONT holders and can receive a commission for each transaction. Theoretically, anyone could vote and create his own node. but in practice this scenario is unlikely: without a certain authority, the user will not be able to gain the trust of the system participants.

The ONT cryptocurrency exchange rate has been holding at quite a high level ever since the project’s launch. NEO holders got the coins for free, which could provoke a large sale of tokens. However, the pessimistic predictions did not come true: since the airdrop ONT rate has doubled. You can consider the Litecoin live price chart as an alternative option for investing — it’s a cryptocurrency that has stood the test of time.

The prospects of Ontology price prediction depend on whether the project team will be able to implement the declared roadmap in full and at the specified time. Onchain developers have a lot of experience and the necessary qualifications. Many of them have worked on NEO and other fintech projects for the company, which makes Ontology investors optimistic.

Thanks to its listing on Binance and other major exchanges, ONT has no liquidity problems. Nevertheless, the price of a token largely depends on the general sentiment on the cryptocurrency market, which is still one of the main drivers of any coin’s price growth.