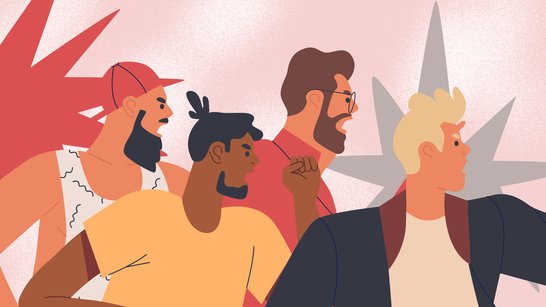 In the age of trans, acceptance, inclusivity, non-binarism and understanding, men are still being treated with disrespect when they become the victim of abuse or suffer from an illness. While everyone is happily prancing in celebration of various successes, a huge issue continues to burden the global mind – toxic masculinity and the expectation that a man cannot be in pain, cannot be sad, cannot cry, cannot be suffering from a mental health issue. That a man who is addicted chose to be such, disrespecting their wife, children and parents.

For substance addiction providers, toxic masculinity and the expectations toward ‘the stronger sex’ provide difficulties in treating patients. Many men arrive at treatment very late in their addiction, after years of hiding their problems and habits, and years of harm being done to their overall health.

The term “toxic masculinity” was coined by American writer Julia Serano. She defines it as:

“A set of culturally reinforced beliefs about what it means to be a real man.”

Serano argues that this cultural belief system has been used to oppress women and other marginalized groups. It is also argued that the concept of toxic masculinity is not specific to any one group; rather, it is a social construct that affects all people regardless of gender identity. The term “toxic masculinity”, according to Serano, can be applied to both genders.

According to Serano, toxic masculinity is based on four elements:

It is important to note that while these characteristics may seem like traits that only apply to males, they are actually common across cultures and societies. This includes countries where females have historically had more power than males. In addition, many individuals within society today identify as transgender or nonbinary, meaning that traditional gender roles do not necessarily fit them anymore.

The prevalence of toxic masculinity has been shown to affect how men view themselves, their partners, and their families. For example, research shows that men who hold toxic attitudes tend to see themselves as better than women, which leads to negative feelings towards women. They also feel less connected to their partner, family, friends, and community. And for health providers, this poses many dangers.

The Stigma on Male ‘Weaknesses’

Often, due to the expectations towards men, they are afraid to admit being ‘weak’, which may signify grieving for a lost loved one, losing their job, sudden health issues, stress, and health conditions. While trying to live according to the stigma on being vulnerable, men force themselves to fight through situations which are not meant to be walked alone. Hence, they often turn to drugs and alcohol as a form of escape.

The stigma around being weak prevents men from seeking help for addiction. According to the National Institute on Drug Abuse, most people who use substances begin using before they are 25. However, only 8% of those who start drinking and smoking will seek treatment. Of those who do seek help, fewer than half receive it.

Dangers of Seeking Help When You Hit ‘Rock Bottom’

Many men who suffer from an addiction begin considering help for their problems only after hitting the mythical ‘rock bottom’. This, however, poses many difficulties for the treatment providers. One of which is the side effects of continuous exposure to a dangerous substance or prolonged substance misuse when it comes to prescribed medications.

Some of these side-effects may include:

Continued exposure to some substances can cause long-term and even permanent harm to organs such as the brain, liver, pancreas, lungs, heart, and muscles.

How to Help Men Heal from Addiction

We need to start talking about this to begin to make changes. We must work together to create a world where men are no longer expected to be strong but instead are encouraged to seek help when needed. The sooner we begin to talk about this issue, the more likely we are to find solutions.

Addiction providers have started offering men-only programmes in order to combat the stigma, shame and vulnerability related to being treated, but also to enforce a stronger, more united community of like-minded people who share the experience of recovery. These programmes offer support groups, counselling sessions, and other therapeutic activities. They also provide a safe space for men to express emotions without judgement.

Advice for Men in Recovery

One of the best ways to prevent relapse is by creating a plan of action with your family and friends. Talk to them about what you want to achieve in life, and ask them if they would be willing to help you stay sober. If they don’t understand why you’re going through this journey, then maybe it’s time to find someone who does.

Your treatment provider will have suggestions for you – call them and ask about aftercare options or which support group meetings they suggest you visit in your area. The peers from your rehab stay will also be an excellent support system for you, as you would be for them.

You should never feel ashamed or embarrassed to admit that you have a problem with alcohol or any other drug. You deserve to get the help you need to overcome your addiction. If you think you might be suffering from an addiction, contact your local hospital or health center and ask for advice. It could save your life.