FIFA World Cup: Top 10 Footballers Who Will Play Their Last Ever World Cup in Qatar 2022 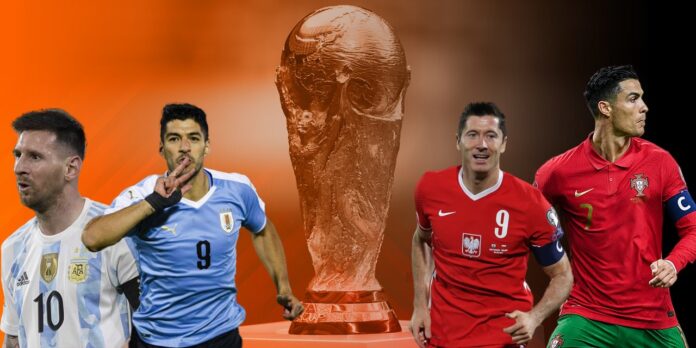 Not all of these players are retiring soon after the tournament, but it could be their last FIFA World Cup, given that it is played after every four years. So, who will be playing the FIFA World Cup for the last time? Find out in our blog post below:

While his opponents hate him the most, there’s no doubt about the fact that Pepe is one legendary player. Portugal has been really lucky to have Pepe in their squad for so long and will admire him for all that he did for the team. However, Qatar 2022 is definitely going to be his last ever FIFA World Cup since he would be turning 43 when the next tournament happens  in 2026.

Thiago Silva is one of the finest defenders in the squad and has offered great performances for Brazil throughout his career. He is in perfect physical condition at the moment, with some stellar performances in the Premier League as well. While he has been a great name in all that Brazilians have won at a club level and the Copa America. Qatar 2022 could be his last chance to ever lift a World Cup for Brazil and the best way of wrapping up his football career.

Fans from across the globe will be looking forward to seeing Thiago showcase his amazing defending skills at the FIFA World Cup 2022.

Di Maria has been one of the most popular players from the Argentina squad for the last decade. While he has played a very significant role in uplifting the team at multiple events and tournaments, his absence from the team in the 2014 FIFA World Cup, which was due to an injury, is still believed to be one of the reasons why Argentina lost the final.

With Di Maria turning 34 this year and having a lengthy football career behind, Qatar 2022 is very likely to be his last ever FIFA World Cup, and everyone will be hoping to see him doing wonders at the tournament.

One of the finest defensive midfielders for Spain and Barcelona, Sergio Busquets has been a star footballer. However, considering that he is now 34 years old, chances are that Qatar 2022 will be his last FIFA World Cup. While Sergio has already lifted the FIFA World Cup trophy, he could become one of the few footballers to lift the title twice as he is set to play at the upcoming FIFA World Cup 2022.

Note: Learn how to watch the FIFA World Cup 2022 from anywhere to make sure you don’t miss these football stars representing their countries at the biggest stage for the last time!

The return of Suarez to Nacional was no doubt a great story, but it also showcased how the footballer’s career is no longer as high-profile as before. He has been at the center of so many controversies, from his handball in 2010 against Ghana to his infamous biting incident involving Giorgio in 2014. However, the 35-year-old player has the chance to redeem himself at the FIFA World Cup 2022, which very well might be his last.

Let’s hope that Luis Suarez plays his last World Cup with great passion and leaves behind plenty of moments for his fans to cherish.

Do you ever feel like you’ve been watching Manuel play since forever? While his long football career definitely makes us feel like that, he still continues to be in peak physical condition. Popular as one of the best goalkeepers from across the globe, Neuer is now 36 years old and is expected to retire soon.

The FIFA World Cup in Qatar is expected to be his last, and fans will hope to see him perform at his best.

If there’s one player we can hope to see in this list, then that is Luka Modric. Despite turning 36 this year, the Croatian football star is as good as ever and will be seen representing his country at Qatar 2022. Many presumed him to be at the peak of his strengths during the FIFA World Cup 2018.

However, this star player of the Croatia squad could be playing his last FIFA World Cup, considering that he is close to approaching the 40-year-old mark.

While the incredible soring of Lewandowski at Bayern Munich and his move to Barcelona says otherwise, the player has turned 34 and expected to play his last FIFA World Cup at Qatar 2022 since footballers can’t play forever.

While watching him lead Poland to a historic win at Qatar 2022 would be a great story, the striker has never even played a knock-out yet. However, what would be a better treat to the eyes of his fans if he could make that happen in his last FIFA World Cup?

Though it’s hard to even say and accept, the era of Lionel Messi is close to ending as he will play his last ever FIFA World Cup at Qatar 2022. He has been one of the finest footballers in history, delivering superb performances and bagging plenty of trophies throughout his career. Fans will hope to see Messi lift the FIFA World Cup trophy for Argentina so that he can bid farewell to international football in style.

Ronaldo may not be having the best time at the club level, but he is still the finest footballer in the Portugal squad and boasts physical fitness much better than men of his age or even younger than him.

Though the football star has a lot of energy left inside, he’s now 37 years old and would probably be playing his last ever FIFA World Cup. As the main goal scorer for Portugal, we hope to see the best of Ronaldo in his last FIFA World Cup.